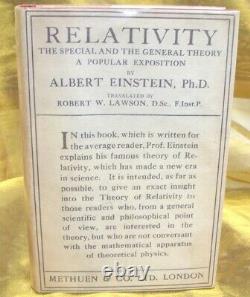 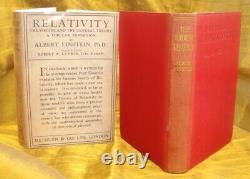 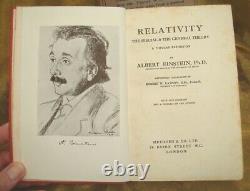 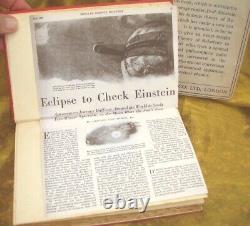 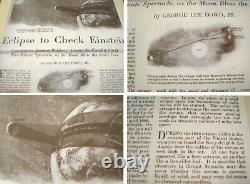 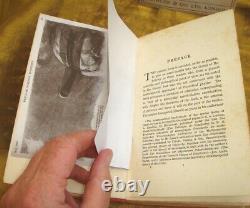 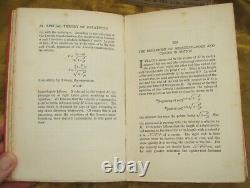 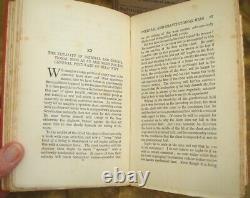 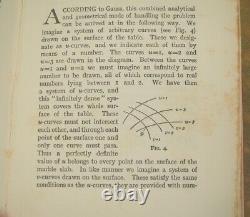 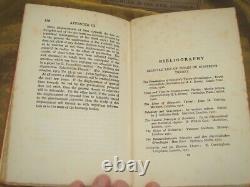 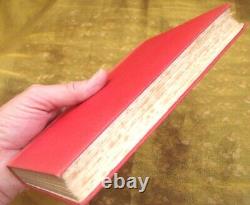 THE SPECIAL AND THE GENERAL THEORY. [there are no dates in the book at all]. As far as I know, this book is a 1924 publication.

The paste-in is a modern photocopy of an article originally published in the Popular Science Monthly from May 1929 which used the findings from an eclipse in the USA in 1925. This book was published in Albert Einstein's Lifetime. Albert Einstein; 14 March 1879 to 18 April 1955 was a German-born theoretical physicist who developed the general theory of relativity, one of the two pillars of modern physics alongside quantum mechanics.

While best known for his mass-energy equivalence formula E = mc2 (which has been dubbed "the world's most famous equation"), he received the 1921 Nobel Prize in Physics, for his services to theoretical physics, and especially for his discovery of the law of the photoelectric effect. The latter was pivotal in establishing quantum theory. A facsimile dustjacket houses this book. Few mms short in height. Priced on spine at 6/- NET.

Enclosed in a plastic protector sleeve. Some wrinkling in general but very nice overall.

Boards are red cloth with lettering to the spine and front board. Spine has lightened in colour compared with the boards front and rear and there is a small 5mm tear to the cloth on the rear spine margin. Other than that, they are in a nice condition. Tightly bound to inner page block. The first blank endpage is adhered to the inner board, this was often done to strengthen the page block which is tight throughout. There are 138 pages and they are of good quality paper stock and foxed throughout. There are a few pencil under-linings through the text but the text is never affected adversely. The item "Albert Einstein Relativity The Special & General Theory 1924 with D/J" is in sale since Tuesday, September 7, 2021. This item is in the category "Books, Comics & Magazines\Books". The seller is "modern_first_printings" and is located in East Sussex. This item can be shipped worldwide.