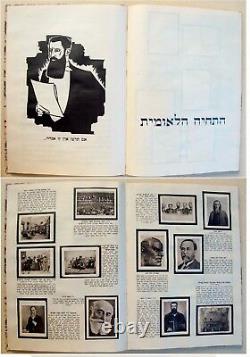 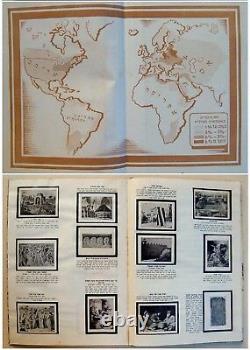 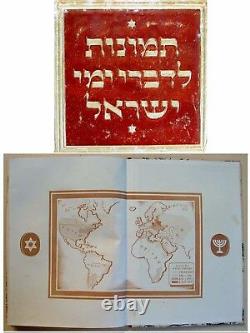 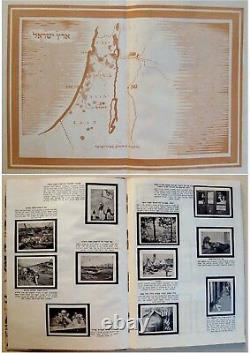 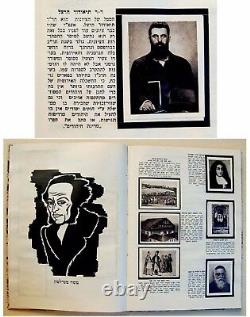 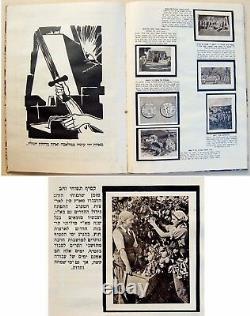 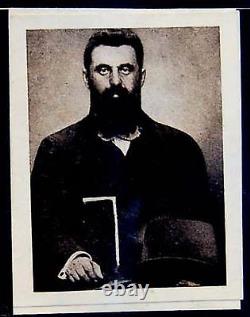 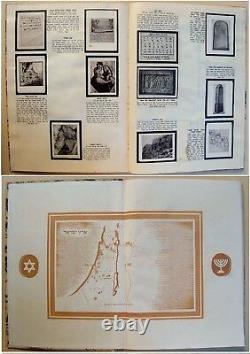 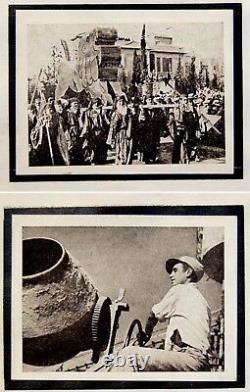 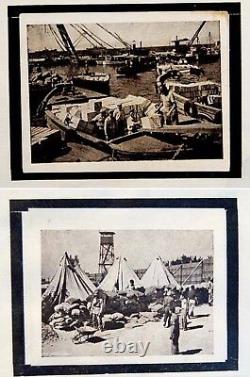 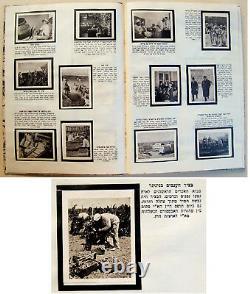 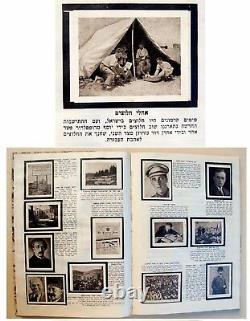 DESCRIPTION : For sale is an EQUISITE cigarette cards Judaica ALBUM depicting the whole HISTORY of the JEWISH PEOPLE, From the ancient BIBLE DAYS up to the PIONEERS settlement in Eretz Israel (Then also refered to as Palestine). Published 1940, The HOLOCAUST and the BIRTH of the STATE of ISRAEL are obviously not included.

The only hints for the destruction yet to come are TWO cards depicting the burning GREAT SYNAGOGUE and the CRYSTAL NIGHT in Berlin 1938 The album "TMUNOT LEDIVREY YEMEY ISRAEL" (PICTURES to the ANNALS of the JEWISH ISRAEL PEOPLE) was published in 1940 by the MASPERO cigarette factory. The album consists of a WHOLE COMPLETE COLLECTION of 197 photographed and illustrated CARDS (ALL cards are present). The whole HISTORY of the JEWISH PEOPLE is depicted in PHOTOS, MAPS, ART and SCIENCE - A VERY NICE CARD of ALBERT EINSTEIN is present (Also Several Lilien, Bezalel etc) , ILLUSTRATIONS, DOCUMENTS, PERSONS, SYNAGOGUES, ZIONISM etc while each of the almost 200 cards is accompanied by a short Hebrew explanation. The ALBUM is also illustrated with BLACK & WHITE graphicaly designed illustrations by ER'EL. Original beautifuly designed illustrated HC. Over 60 PP (Not paged). 197 CARDS (All cards are present as issued). Full album, 197 CARDS (ALL cards are present). Tears in back of spine? (Pls look at scan for general look) Album will be sent inside a protective packaging. AUTHENTICITY : The item is fully guaranteed ORIGINAL from ERETZ ISRAEL - PALESTINE 1940, Not a recent edition, Not a reprint or immitation , It holds a life long GUARANTEE for its AUTHENTICITY and ORIGINALITY. Album will be sent inside a protective packaging. The company produces, markets and distributes cigarettes, cigars, lighters and smoking accessories.

Dubek was established in 1935 by Martin Gehl, a German emigrant with a Zionist vision of establishing a manufacturing base in Israel. Throughout the years, Martin Gehl together with his son Zorach, expanded the business and took over all other cigarette manufacturers in Israel. Leaving Dubek as the only company in the field. In 2003 Dubek became a private company.

Today the company is headed by Dr. Roy Gehl, Martin Gehl's grandson and its main offices are situated in Martin Gehl Street named after its founder.

The brand, launched in 1952 in a distinct green, 80mm,'soft-pack' which has never been dramatically changed, is the oldest in Dubek's product line. The cigarette also has the highest tar (19mg) and nicotine (1.3mg) amounts available on the Israeli mass-market. Dubek has since released two different versions under the same Noblesse brand; a lower nicotine/tar blend in light-green packaging (Noblesse Blend - it is illegal to use the term'lite' on cigarettes in Israel), and an even lower nicotine/tar blend in blue packaging (Noblesse American Blue). In addition, the Company also imports its brands to a number of countries overseas. Company brands include Time Noblesse no.

9 Mustang, Europe, Nelson, Sheraton, Montana and Broadway. In addition to the brands manufactured in the Company's factory, the Company exclusively imports brands manufactured by the Danish company House of Prince: Wall Street, Rockets and Slim Agenda. Dubek employs maximal efforts to provide its clients a large variety of high-quality products, while maintaining constant innovation and offering a solution to the entire Israeli population, for all its sectors.

The Company's brands enjoy an international reputation of excellence and have won many gold medals for quality in the prestigious international competition "Monde Selection". In 1935 the Company was established by a group of Industrialists, including a mechanical engineer who specialized in equipment for the tobacco industry - Mr. Since its establishment, the Company has been persistent in manufacturing high quality cigarette products. Gehl, fourth generation of cigarette manufacturers, Dubek became a modern and efficient factory in the Israeli industry.

In 1985 Dubek was ranked 11th on the Dun & Bradstreet list of "The 100 leading companies in Israeli Entrepreneurship" In 2003 Dubek became a private company. In 2004 Dubek received exclusive representation rights from the Danish "House of Prince" Company for its cigarette and tobacco products and began distributing its brands.

(in 1911 till 1914 was a packing cigarette warehouse, under the Turkish occupation). Tel Aviv - still manufacture after 1948 till 13. 1956 when went on voluntary liquidation - Emir, Maspero 18, Latif, Matossian Royal, Superfine, Universal, Jasmin, Nacshon, Leumi, Shofra, Zabra, Dalia, Nimrod The Jews Hebrew:????????? Yehudim also known as the Children of Israel Hebrew:??? Bnei Israel or the Jewish people, are an ethnoreligious group, originating from the Israelites (Hebrews) of the Ancient Near East.

According to the Bible and Jewish tradition, Jewish ancestry is traced back to the Biblical patriarchs Abraham, Isaac and Jacob who lived in Canaan around the 18th century BCE. Historically, Jews had evolved mostly from the Tribe of Judah and Simeon, and partially from the Israelite tribes of Binyamin and Levi, who had all together formed the ancient Kingdom of Judah. A closely related group is the Samaritans, who claim descent from the Israelite tribes of Ephraim and Manasseh, the sons of Joseph. The Jewish ethnicity, nationality and religion are strongly interrelated, as Judaism is the traditional faith of the Jewish nation Converts to Judaism have a status within the Jewish ethnos equal to those born into it. Conversion is however not encouraged by mainstream Judaism and is considered a tough task, mainly applicable for cases of mixed marriages.

The modern State of Israel was established as a Jewish nation-state and defines itself as such in its Basic Laws. Its Law of Return grants the right of citizenship to any Jew who requests it. Israel is the only country where Jews are a majority of the population.

Jews had also enjoyed political independence twice before in ancient history. The first of these periods lasted from 1350 to 586 BCE, and encompassed the periods of the Judges, the United Monarchy, and the Divided Monarchy of the Kingdoms of Israel and Judah, ending with the destruction of the First Temple. The second was the period of the Hasmonean Kingdom spanning from 140 to 37 BCE and to some degree under Herodians from 37 BCE to 6 CE. Since the destruction of the First Temple in 66 CE, most Jews have lived in diaspora.

A minority in every country in which they live (except Israel), they have frequently experienced persecution throughout history, resulting in a population that has fluctuated both in numbers and distribution over the centuries. The world Jewish population reached a peak of 16.7 million prior to the Second World War, but six million Jews were killed in the Holocaust.

These numbers include all those who self-identified as Jews in a socio-demographic study or were identified so by a respondent in the same household. The exact world Jewish population, however, is difficult to measure. In addition to issues with census methodology, there are halakhic disputes regarding who is a Jew and secular, political, and ancestral identification factors that may affect the figure considerably.

This item is in the category "Collectibles\Religion & Spirituality\Judaism\Images". The seller is "judaica-bookstore" and is located in this country: IL.

This item can be shipped worldwide.